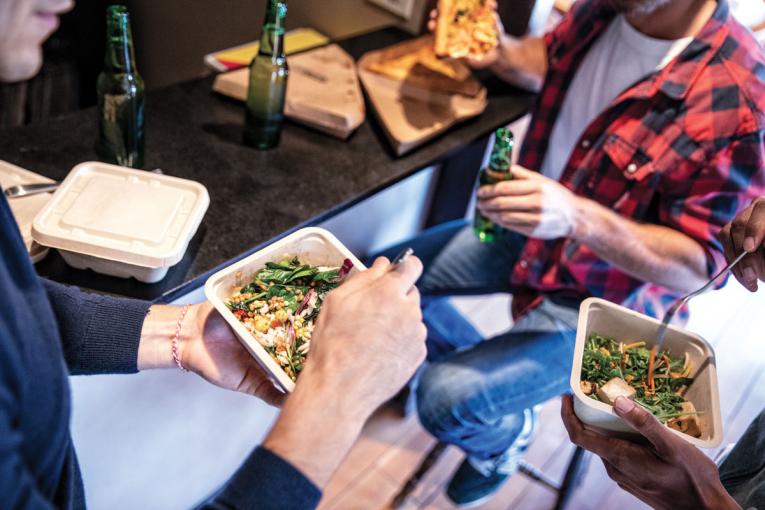 Restaurants are thinking way outside the box with their menus and branding as they learn to game the off-premises system.

By Kevin Hardy
Via QSR

Having already jumped into the buzzy world of ghost kitchens, Dog Haus decided it still needed to do more to expand its foothold in the ever-important world of mobile ordering and delivery. And its team had an idea: What if they developed additional restaurant concepts out of their existing menu, leveraging their ingredients and operations to widen their presence on delivery apps?

That idea became a reality recently as Dog Haus developed The Absolute Brands, a portfolio of eight virtual brands to operate out of its kitchens—requiring only minimal changes to its food mix. Now customers ordering food from Bad Mutha Clucka and Bad Ass Breakfast Burritos are actually ordering from Dog Haus, even if they might not realize it.

And while that idea was in development months ago—intended for a soft launch in May and then wider system roll-out early next year—Dog Haus expedited the launch in response to the coronavirus pandemic. Indeed, restaurant brands were already beginning to blur the lines between real and virtual concepts, maximizing kitchen space while also gaming the off-premises system. Now that restaurants are relying almost entirely on off-premises in the aftermath of the coronavirus outbreak, this virtual innovation is all the more important.

“I think of it like, ‘Do not break glass unless there’s an emergency,’ and we grabbed the mallet and broke the glass,” says Dog Haus cofounder André Vener. “We needed to find something that would help franchisees at least recoup … part of their losses from this coronavirus.”

The thinking behind The Absolute Brands goes like this: Platforms like DoorDash and Uber Eats only allow restaurants to identify a few searchable keywords. Dog Haus has selected key terms like burgers, hot dogs, and Americana. Those are great for much of the menu, but they don’t do anything to draw a user who’s looking for something like a chicken sandwich. By creating the Bad Mutha Clucka virtual brand around its chicken sandwiches, Dog Haus maximizes the company’s exposure on delivery apps with virtually the same amount of effort from employees in the back of house.

Some of Dog Haus’s virtual concepts, including Bad Ass Breakfast Burritos, don’t serve existing menu items, and required a few new SKUs. Vener says customers won’t see these brands outside of the virtual world. “You will not be able to go into a Dog Haus and get that food,” he says. “We don’t want to confuse people.”

The underlying premise behind the shift is reminiscent of the evolution of food trucks, which allow chefs to test a concept without the expense of a full brick-and-mortar restaurant. Dog Haus will likewise experiment with its emerging brands. Some ideas may eventually evolve into standalone restaurants. Others could quickly fade away. But all require only a modest initial investment in a landing page and some marketing.

“We can add and drop these virtual restaurants with a click,” Vener says. “You can just turn it on and off.”

At a time of upheaval in the restaurant industry, it’s no surprise that brands have adopted new strategies to exploit the off-premises business. That’s what drove the development of ghost kitchens two or three years ago, too; they allowed operators to concentrate efforts in a small, cost-effective kitchen at a time of high rents.

“You’ve got to be creative and try something,” says Dan Flesichmann, vice president of Kitchen Fund, which invests in early-stage restaurant concepts. “You need to be owning the digital channel and the delivery piece.”

While the ghost-kitchen concept has earned plenty of ink, Flesichmann thinks the idea might have been overhyped. That’s because the unit economics don’t always prove out. Labor costs still quickly piled up in expensive cities like New York and San Francisco. Fleischmann says operators often need to offer multiple dayparts to recoup those investments in ghost kitchens. As evidence of the challenges, he pointed to Kitchen United’s first ghost kitchen in Pasadena, California: A majority of the first brands to open shop there didn’t last a year. Likewise, early ghost-kitchen pioneers Munchery, Maple, and SpoonRocket collectively raised nearly a quarter of a billion dollars, “and they’re all gone,” he says.

In the last few years, Fleischmann says, he’s witnessed a wave of existing restaurants spinning off into virtual brands. But existing only in the world of third-party apps isn’t necessarily easy. With a traditional restaurant, the real estate helps build brand awareness, as customers might pass a space and its signage multiple times per day. And once social-distancing restrictions are in the rearview mirror, people will likely be eager to dine in restaurants once again.

The ability to spin off new virtual concepts empowers operators to diversify their lineups. But it can be difficult to build credibility in a new cuisine. After all, how much does a sub shop know about making burritos?

Wow Bao developed a new off-premises platform that focuses on its core product offering. It recently launched a new platform where it signs resale agreements with other restaurants and offers them a miniature concept built around its Asian bao buns. With just a few pieces of equipment and a box of its frozen product, just about any store with a kitchen can start selling Wow Bao buns out the back door to third-party delivery drivers, president Geoff Alexander says.

“We believe that any kitchen can be a dark or ghost kitchen,” he says.

Similar to Dog Haus, Wow Bao had been developing the platform for several months, but it became even more important in the wake of the coronavirus. The brand established its first delivery-only presence in San Francisco in March after several weeks of testing in its home market of Chicago.

“We saw this as an opportunity to help restaurants that sit on the breakeven threshold, and could assist them in gaining topline sales and strong bottom lines,” Alexander says. “With the rise in delivery due to COVID-19, we are prepared to help restaurants now more than ever.”

With no need for a hood, even a doughnut or ice cream shop could dabble in the Asian concept. While it’s operationally a breeze—partners need only to steam the frozen product and package it—some were hesitant about the marketing required to introduce a new brand. So the chain worked with third-party apps to secure top rankings upon rollout and invested in targeted social media advertising.

Operators need only invest about $2,000 to participate. That cost includes onboarding, training videos and reference manuals, supply chain assistance, third-party assets, four pieces of equipment, and opening a packaging order. If the partner already has the equipment, the initial cost is much lower.

Wow Bao lets its partners set prices. In no time, a pizza or burger joint could diversify its business—and add new incremental revenues. The company believes correctly operated units should produce margins of 30–40 percent. Wow Bao’s goal is for operators to do $2,000 a week in sales.

In 2018, FAT Brands, parent company of Fatburger, Bonanza Steakhouse, and Buffalo’s Cafe, acquired the Hurricane Grill & Wings chain. Since then, Fatburger has started integrating the Hurricane Grill concept into about 25 existing Fatburger stores—but only as a virtual option available on delivery apps.

That allowed the company to introduce its predominantly East Coast Hurricane’s concept into new markets without investing heavily in new stores. And it instantly doubles the local market presence on third-party apps without introducing an untested concept.

“It takes a lot of hard work to build a brand, build a reputation, and build loyalty with customers,” says Jake Berchtold, director of operations for FAT Brands’ fast casual division.

Delivery has proven essential in recruiting new customers; Berchtold says about 70 percent of third-party app customers were new to the brand at the beginning of this year. And prior to COVID-19, some locations were doing as much as half of all sales through delivery. “It’s been a game changer,” he says.

Like with other delivery orders, the virtual brand delivers incremental sales growth without substantially changing the basic operating costs of each unit. Fatburger is making similar moves into multi-operator ghost-kitchen spaces, which Berchtold says will help expand into new high-profile markets without a huge capital investment.

Traditional store designs continue to evolve. FAT Brands uses a modular design for both the front and back of house, which will allow for easy reconfiguration down the road. “We kind of joke internally: Today we’re designing restaurants to meet these drivers for third-party apps,” he says. “Tomorrow or next year it could be drone delivery.”