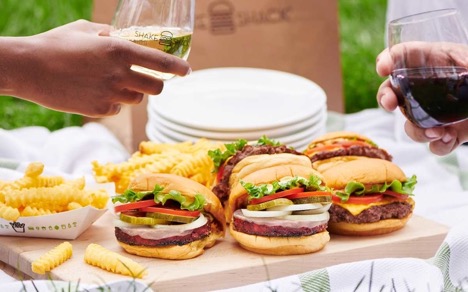 by Danny Klein
via QSR

It can be easy to forget Shake Shack is still in the very early innings of its growth. Today, 60 percent of the burger chain’s domestic units are less than three years old. Twenty-four percent have been on the market for 12 months or less. The average age of restaurants across Shake Shack’s 163 U.S. corporate system (there are another 111 licensed units) is just 2.9 years. Strikingly, twenty-three of the fast casual’s 31 markets have five or fewer locations.

And this is only capturing the domestic picture. Globally—a path Shake Shack approaches via licensing—there are 22 stores in North America, two in Mexico, three in Turkey, 40 in the Middle East, one in Singapore, five in Hong Kong, two in the Philippines, three in Shanghai, 14 in Japan, and 11 in South Korea. Much of the international map remains wide open (mainland China growth will ramp up in 2020 with a mid-year entry to Beijing).

Shake Shack’s expansion, rightfully, gets talked about mostly from a corporate perspective. But if you look back to 2015, there were 44 stateside company-run restaurants and 31 licensed. That gap has widened over time. Yet Shake Shack’s licensed development has tracked steady.

In this coming year, Shake Shack expects to open 40–42 corporate units and 20–25 net licensed, continuing the above trend. The international whitespace accompanies interesting U.S. developments near-term for Shake Shack, which started 19 years ago as a hot dog cart.

The reason being its immediate growth looks pretty different than what we’ve witnessed in recent years. As CEO Randy Garutti put it, the chain spent the last few gaining a strong foothold in major cities nationwide. With that foundation laid, however, it’s time for Shake Shack to shift focus to greater existing market penetration. Fewer new-market entries and more attention spent to rooting brand awareness and filling real estate around established restaurants.

Shake Shack’s stock popped throughout last week following its presentation at the ICR Conference in Orlando. And this infill factor was a major culprit.

Over time, concentric growth should allow Shake Shack to curb expansion costs to a degree and balance average-unit volumes. By November, the brand’s trailing 12-month AUVs were $4.2 million, with average weekly sales of $80,000. As Shake Shack broadens sales volumes by opening across the country and expanding further in existing markets, these average unit metrics will experience gradual declines before leveling off. It targeted $4.1 million for the full fiscal calendar.

The dynamic slide two ways, really. Adding more stores to a trade area opens the cannibalization conversation. Yet it also speaks to improved brand awareness and less reliance on marketing. Not to mention aiding delivery and off-premises business by widening Shake Shack’s coverage radius for people staying at home. That’s why site selection will be key (more on this later).

By building out from a market base, Shake Shack will also have the opportunity to support and gradually leverage existing infrastructure. This includes operations, training, marketing, and supply chain connections.

Shake Shack’s total revenue lifted from $191 million to $567 million in that span. Total systemwide sales rose to $839 million from $295 million and cash flow from operations hiked from $41 million to $96 million.

To dress it down, what we’re seeing now is one of the quick-service industry’s fastest-growing systems start to mature. And that’s something competitors should take notice of.

In some respects, real-estate agility that mirrors Starbucks’s path to coast-to-coast growth (Shake Shack has no intention of getting this big, though).

In 2019, Shake Shack built across a mix of formats, evaluated others, added a number of premium food courts, and expanded in outlet malls. This coming year, as well as 2021, expect to see Shake Shack grow via urban, freestanding pads, shopping lifestyle centers, and test several other options along the way, including smaller-footprint designs that increasingly integrate digital ordering and an improved pickup experience.

You can see this model unfold today in Shake Shack’s original and most established center—New York City. The Big Apple holds that claim from an awareness standpoint, at least, despite the fact eighty-five percent of the brand’s units are located outside NYC.

Any cookies that may not be particularly necessary for the website to function and is used specifically to collect user personal data via analytics, ads, other embedded contents are termed as non-necessary cookies. It is mandatory to procure user consent prior to running these cookies on your website.